Pretty soon Valentine’s Day will be upon us.  I know that there are some who think it’s so over rated, but I can’t help but feel excited about what kind of card or flowers my sweet Valentine has picked out for me.

I am ‘that’ mom who puts heart-shaped things in the kids lunches, even though they are well into junior grades and almost into highschool.

So I wanted to have a few posts dedicated to some Valentines treats because I have so many cute things rolling around in my brain.  This is the first post, my French Vanilla Cupcakes with Maraschino Swiss Meringue Buttercream. 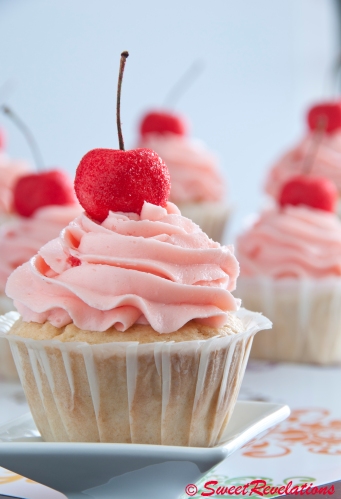 I am always on a quest for a good vanilla cupcake.   You know which kind really tastes the best?  The cake mix kind.  They have such wonderful vanilla flavour and are so light and fluffy.  I have yet to find this in a scratch version.   Not that there is anything wrong with a box version!  To me, well, for some reason it just feels like cheating.

Do not despair…I am not one to give up….on cake. 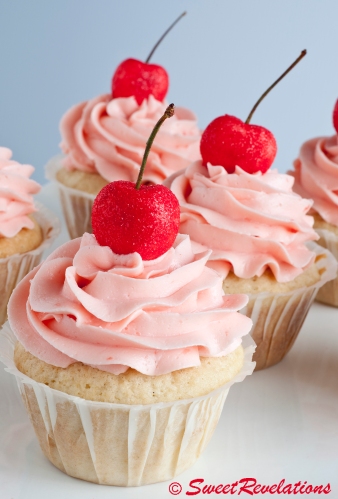 I really love the way these turned out.  Wouldn’t you love to have one of these waiting for you on Valentine’s Day?

Perhaps waiting on your desk, or in your lunch?  Sitting outside your door? 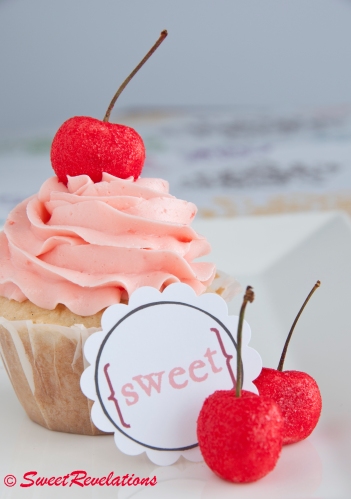 The toppers are just some cherries made out of fondant and coated with cake glitter.  I did happen to have real cherries in the fridge that I stole the stems off of.

I’m not going to include the Vanilla Cake recipe because it needs some work!  Use your favourite Vanilla Cupcake recipe and top with the Maraschino Swiss Meringue Buttercream (recipe below).

*just an update…if you find the cherry icing doesn’t have a strong enough cherry flavour, add a few drops of cherry oil which can be found at most baking supply stores.

1. Fill a saucepan (large enough to fit your mixing bowl just a few inches) with two inches of water. Bring the water to a boil, then reduce heat to med-low so water continues to simmer.

2. In your stand mixer bowl, hand whisk the egg whites and the sugar just until combined. Place over simmering pot and whisk for approx 4 mins until the egg whites are hot (about 150 degrees). The sugar should be dissolved by this time as well. Place bowl on stand mixer and attach the whisk attachment. Whisk on medium speed until whites have increased in volume, are thick and glossy and the outside of the bowl is just slightly warm to the touch (this can take up to 10 minutes!).

3. Remove whisk attachment and replace with paddle attachment. Beat on low-speed until mixture is completely cooled. Increase speed to medium and add butter pieces one at a time. Scrape the bowl and continue to beat until buttercream is glossy, smooth and thick. It may separate at first, but continue beating and it will emulsify. Add vanilla flavouring, a pinch of salt and cherry puree (to taste) and beat until combined.   Use immediately.