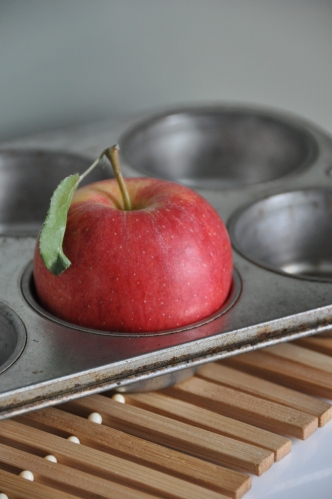 I also bought a huge jar of homemade apple butter and decided to use it to flavour the icing.   Anyone who has been following SweetRevelations knows how much I adore my yummy Swiss Meringue Buttercream icing!

The cakes were really good.  I love any cinnamon/nutmeg/allspice combo.  And the icing was pretty yummy too!  Great apple flavour that screams fall and Thanksgiving dinners.  I thought the cakes were so good that I left some un-iced (the horror!) and packed them in the freezer for lunch treats. 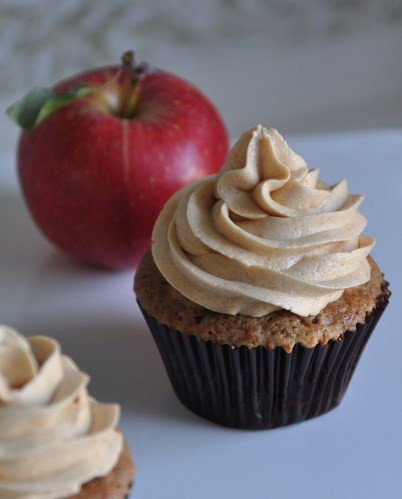 from The Pastry Case

1.  Using a mixer fitted with the paddle attachment, cream the butter and sugar on medium speed until light and fluffy, about 3 minutes. Scrape down the sides of the bowl with a spatula then beat in the molasses. Add the eggs, one at a time, beating for 30 seconds between each addition.

2.  In a medium bowl, stir together the flour, baking soda, salt, and ground spices to blend.

3.  Add the flour mixture and sour cream alternately to the batter, starting and ending with the flour mixture. After each addition, beat on low-speed just to combine the ingredients. Stir in the shredded apples and vanilla.

Spoon the batter into the muffin cups. Bake 20-25 minutes until the cupcakes spring back lightly when touched and a toothpick inserted in the middle comes out clean.

1.  Fill a saucepan (large enough to fit your mixing bowl just a few inches) with two inches of water.  Bring the water to a boil, then reduce heat to med-low so water continues to simmer.

2.  In your stand mixer bowl, hand whisk the egg whites and the sugar just until combined.  Place over simmering pot and whisk for approx 4 mins until the egg whites are hot (about 150 degrees).  The sugar should be dissolved by this time as well.  Place bowl on stand mixer and attach the whisk attachment.  Whisk on medium until whites have increased in volume and the outside of the bowl is just slightly warm to the touch (this can take up to 10 minutes!).

3.  Remove whisk attachment and replace with paddle attachment.  Beat on low-speed until mixture is completely cooled.  Increase speed to medium and add butter pieces one at a time.  Scrape the bowl and continue to beat until buttercream is glossy, smooth and thick.  It may separate at first, but continue beating and it will emulsify.  Add vanilla flavouring, a pinch of salt and apple butter and beat until combined.  Use immediately.